Legislation being drawn to establish a “School Marshal Program”, similar to the “Air Marshal” program, will be the topic at a public panel discussion on Thursday, March 22, 2018, 7:00pm at the Pontiac Country Club, 4335 Elizabeth Lake., Rd., Waterford.  This event is free and open to the public.  NORC (the North Oakland Republican Club) is providing a community service to educate the electorate on one of the most significant political issues of our time.

Panelists will include Representative Jim Runestad, Chairman of the House Judiciary Committee, attorney Ryan Berman and others on both sides of the issue.  A town-hall Q&A session will allow attendees to interact with the panelists.

NORC is the Premier Republican Club in Oakland County. Established in the early 1960s,  its mission is to educate, inform and involve the public in the government and policy.  The monthly meetings are free and everyone is welcome. 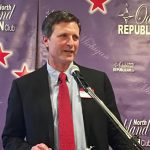